How Weird Street Faire is the hugely successful springtime street faire that started in front of the old CCC warehouse on Howard Street in San Francisco.

Brad Olsen is also the Executive Director of the World Peace Through Technologies Organization (WPTTO), and by extension, the current event producer for the “How Weird Street Faire.” Brad began this street faire in 2000 as an endeavor seeking simply to create a fun, extraordinary job for himself, which became, by a twist of fate, an event in service to a great many others. What started as an outdoor block party in front of an artist warehouse for a few hundred people became a huge popular street festival where thousands flocked to dress up, dance and celebrate life. Together with a group of like-minded electronic music fans with a shared interest in producing live events, a unique gathering was created in which there had hitherto been none. What morphed to become the How Weird of today exceeded all expectations. In a city that raises a very high standard for its unique outdoor festivals, all these years later Brad Olsen can call himself the founder of one of San Francisco’s largest events. Without consciously intending to, but consonant with his life purpose, he found himself using his creative talents with excitement and inspiration while being in service to a great many others, if only for a single day. In all his years of producing parties, this one single event may have the most far-reaching consequences. 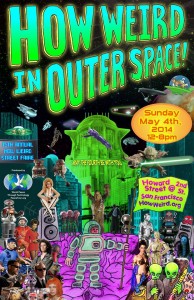 The 2014 How Weird poster designed by Brad Olsen and Robert Kidwell in their 15th collaboration.

Manage Cookie Consent
To provide the best experiences, we use technologies like cookies to store and/or access device information. Consenting to these technologies will allow us to process data such as browsing behavior or unique IDs on this site. Not consenting or withdrawing consent, may adversely affect certain features and functions.
Manage options Manage services Manage vendors Read more about these purposes
View preferences
{title} {title} {title}